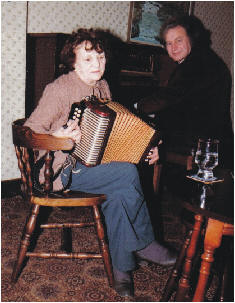 This contribution to our series of portraits of singers and musicians from East Anglia comes from Katie Howson, co-founder of EATMT, who spent much time playing with Dolly Curtis in the pubs around Framlingham, Suffolk in the 1980s.

In the early 1980s John and I spent many evenings in the company of traditional musicians, singers and steppers in the pubs around Framlingham in mid Suffolk. We were often taken there by Fred Whiting, the subject of the previous article in this series, and one of the regular meeting places was the Crown in Brundish. It was here we first met Dolly Curtis, and we met up again on many occasions in the Dennington Bell and Framlingham Hare and Hounds. Dolly spent much of her early life in the Bell, as her family ran it, and as they kept a melodeon behind the bar for the use of any visiting musicians, and Dolly used to tell us of the days when she was scarcely tall enough to peek over the bar and hear legendary local box players such as Alf Peachey and Walter Read. Oscar Woods was also a regular visitor to the Bell, where he knew that as a fellow musician he was assured of a warm welcome.

In later days in the Bell, Dolly was as likely to play the piano as the melodeon, unless Brian Felgate was there, who would accompany her on piano, along with the late Billy Cox on drums. The three of them made an unforgettable impression at the English Country Music Weekend in Mendlesham in 1984.

Dolly’s repertoire included an interesting array of stepdance tunes (hornpipes) and polkas along with more recent pieces, the favourite of which was the well-known ragtime tune The Entertainer. One of her trademark tunes which is now very popular, is still known simply as Dennington Bell. I remember the celebration of her eightieth birthday, in Dennington Bell, when these photographs were taken: veteran singer Ted Chaplin leaned over and said ‘Course she’s not really eighty you know, I knew her as a youngster and …’ I can’t now recall whether he thought she was older or younger … It didn’t matter too much as we were all having a good time anyway!

I still play a number of Dolly’s tunes, which I learned through playing alongside her at those pub sessions, and her melodeon is now in the capable hands of the latest in a line of female melodeon players in Suffolk, Jessica Chilvers.

As with many of the Suffolk musicians and singers, there is more information about Dolly on the Musical Traditions website, (from Keith Summers’ book, ‘Sing Say and Play’)