Past Schools projects, workshops and classes 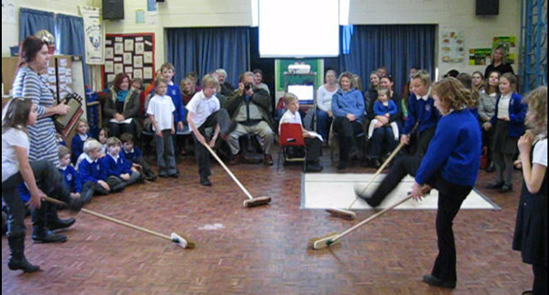 Since 2001, we have worked in primary schools across the region, sometimes on one-off visits, and sometimes on longer projects, often as part of a wider community project.

Until 2016, the then Katie Howson offered some ready-made programmes which all included song and dance. Our popular seasonal programmes involved a historical aspect: Victorian Harvest, Victorian Christmas, or sessions looking at some aspect of Victorian life through local folksongs, such as transport, farming, the roles of men and women, and the story of the east coast fishing industry in songs, dances and drama. This programme is currently suspended.

Over the last few years we have worked with hundreds of children on extended projects in the Stour Valley on the Suffolk / Essex borders (seven schools in 2011-2013 – see photo above), King’s Lynn (see photo below) and Diss in Norfolk and Cottenham, Willingham and Waterbeach in Cambridgeshire (Songs from the Fen Edge) as well as many one-off events.

Through our projects, children in many schools have learned traditional songs and dances from their locality: for example, over 200 children in King’s Lynn learned local fishing songs during the summer of 2006. Following an initiative by the East Anglian Traditional Music Trust, Suffolk Folk donated twenty mini-melodeons to a Suffolk primary school. We also have our own stock of mini-melodeons which we can offer to schools on a shorter term basis, or as a one-off experience. An exciting partnership with the regional dance development agency, DanceEast, which involved a series of workshops on stepdancing for another Suffolk school, resulted in the production of a DVD for schools use and distributed nationally, ‘Soil Dances’.

High Schools
We have worked in high schools on extended projects and in 2013/4 were privileged to be asked to be part of a national project, “The Full English” run by the English Folk Dance and Song Society. In the eastern region, as in each other region, there were two schools involved: one primary and one high school. Katie Howson from the East Anglian Traditional Music Trust worked as musician on the high school project, alongside leader and dancer Kerry Fletcher, trainee musician Paul Scourfield and Cambridgeshire dance development coordinator Amy Holly with Y 12 & 13 (sixth-form) performing arts students. We were tasked with teaching traditional dance and fusing it with contemporary moves, to tell the story of a ballad collected locally, Lucy Wan. The school wanted a challenging theme to work on and this ballad is about murder and incest. We taught them molly, step and broom dancing, using tunes from the region. The molly dance was used to represent the community, with contemporary moves expressing the breaking of social mores through incest and finally murder, from the song lyrics. The students were absolutely amazing, totally committed and very talented. The project culminated in a performance alongside fifteen other schools at Birmingham Town Hall in June 2014, where the photographs below were taken, by EFDSS photographer Roswitha Chesher. The project was based on the digitisation of major archive collections, which may be viewed on the EFDSS website. Their website also contains resource packs for schools to use, including this one, “Love me or kill me”.

Song Projects
In 2009, we worked on a project looking at songs collected in Cambridgeshire, in partnership with the Cambridge Music Festival and Fen Edge Community Association, called Songs from the Fen Edge.

Longtime EATMT collaborator Chris Coe, together with Mary Humphreys, who has unparalleled knowledge of songs from the county, ran a series of song workshops with local schools and also evening workshops for adults. Chris and Mary provided inspiring leadership and an encouraging atmosphere, and brought to life some of the fascinating songs collected by Ralph Vaughan Williams, Fred Hamer and Ella Bull from singers such as Charlotte Dann, Hoppy Flack and Ginger Clayton in the early 20th century. The workshops led to a sellout evening performance in Cottenham Village College, near Cambridge.

These photographs show just a fraction of what went on at the final concert of this project. What you can’t see is the sixty children who performed, or the further hundred or more children who had taken part in the workshops through October and November. What you can’t hear is the glee in the voices of the seven year-olds singing The Row of Pins or the passion of the twelve year-olds singing about the threat of the dykes giving way and communities being flooded, or the emotion in the voices of the adults as they sang The Hungry Army – a song as full of meaning today as when Charlotte Dann sang it a hundred years ago. The remit of the project was to look at the theme of evolution through local folksongs, which gave our two inspirational workshop leaders plenty of scope to investigate the local repertoire and to dream up ways of letting these songs be moulded in the hands of a new community of singers. Chris Coe and Mary Humphreys achieved this balance brilliantly, and a packed audience for the final concert were able to see the results alongside other aspects of the local musical traditions: dulcimer playing and stepdancing. The Cottenham Local History Society also contributed by showing a slide show of old photographs. The project was produced in partnership with the Fen Edge Community Association, the Cambridge Music Festival and Start Arts, with funding from Awards for All and South Cambridgeshire council.

Below: other song workshops, in Harleston and King’s Lynn.

Fiddle workshops
In the past we have held classes in English fiddle style for beginners and competent players – in 2002 as part of the Tuning In project, in Long Melford, Suffolk, in 2004 as part of the Musical Roots launch in Eye, Suffolk, and in 2005 in Shipdham, Norfolk, as part of the Playback project.